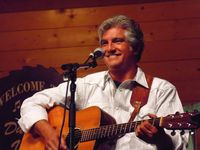 We are very excited to welcome Jerry Salley for a 1 night "live" house concert event on Saturday, December 7th. Tickets are $18.00 Advance; $20.00 at the door.

Festivities will be held at The Pollock Ranch (in Wooster, AR - close to Greenbrier/Conway, AR) and include:

6:00p - Food & Social time (We will have a main dish, apps, snacks, regular and adult beverages (you are free to bring your favorite flavors as well). )

Here are a few comments about this Award winning singer/songwriter and friend.

Jerry Salley has been referred to by Billboard Magazine as "One of Music Row's greatest veteran tunesmiths," and has had over 500 songs recorded (selling in excess of 18 million records worldwide) in his multi-award winning songwriting career. From Sir Elton John's only chart single to appear on the Billboard Country Chart ("Where We Both Say Goodbye" - duet with Australian artist Catherine Britt) to a Gospel song so popular it has been included in Church Hymnals ("His Strength Is Perfect”), Jerry's long list of accomplishments speaks for itself.

Writing and singing in Nashville since 1982, he has written multiple hits in Country, Bluegrass and Gospel music and may well be the most successful songwriter to have earned equal recognition from all three genres of music.

Learn more about Jerry's career in our events section at jerrysalley.com.

WE LOOK FORWARD TO WELCOMING YOU!