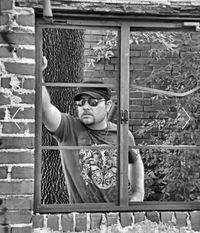 Special Guest Artist - MICHEAL LEE COLLINS (of Haven Hill and Further Down); Micheal is a veteran of the stage and studio, and having played countless shows in front of thousands of people, has always found a way to evolve in the music scene. Collins' songs are known for their hooks and stories. He is a storyteller. He writes songs that deal with intense subjects packed with raw emotion all with an ease of motion set up by powerful grooves.

MORE ABOUT JASON CAMPBELL Jason Campbell was born in a small town in Central Arkansas. At the early age of five years old his family noticed he had quite a talent , while playing an Elvis Presley record on the stereo, his mother heard him singing along in perfect pitch. Shortly he began singing at all the family gatherings, this began honing his talent as a entertainer. At the young age of 12 his mom and dad surprised him at Christmas with his first acoustic guitar. After learning to play he landed a few local gigs at pool halls and pubs close to his hometown of Perryville, Arkansas. Close to his nineteenth birthday he experienced his first bit of success when he won an audition to Ed McMahon's Star Search and was flown to Orlando Florida to perform with his band "County Line". When Jason decided to pursue the big move to Nashville, Tennessee he had no idea where it would take him, but shortly after his arrival he was signed to a writing deal with a local publishing company. Jason was then fortunate enough to write a couple of songs that Country Music Star Sammy Kershaw recorded on his 2002 Album titled "I Want My Money Back". Jason has opened for various artists such as Justin Moore, Mark Chestnut, David Allan Coe, Billy Currington, Mel McDaniel, Johnny Lee, Mickey Gilley, Restless Heart, Clint Black and many other artists throughout his career. Please save the date and try to join us. You'll be glad you did! -Jim and Terry